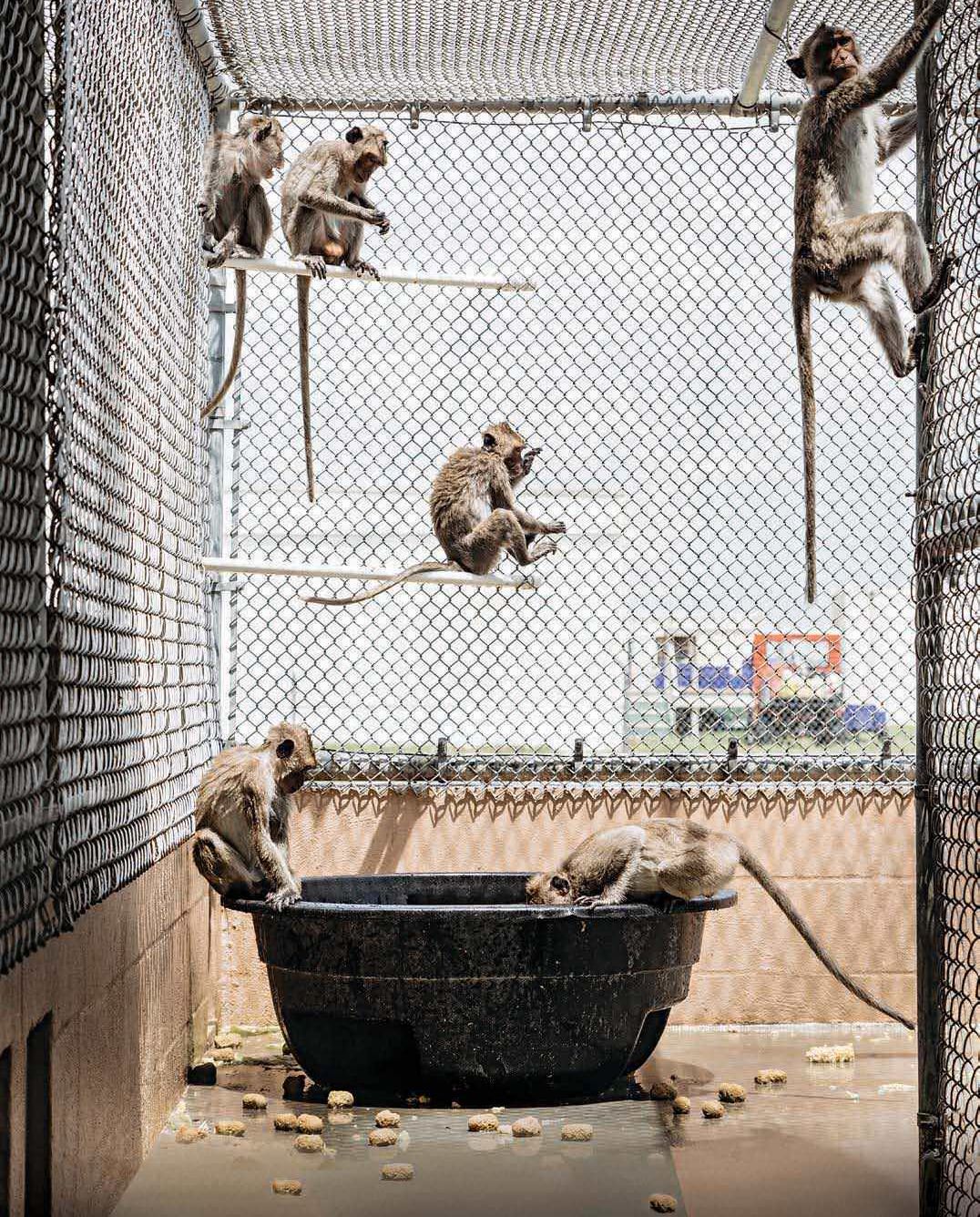 The breeders are proud. The activists are mad. The neighbors are confused. And the monkeys still have good aim.

Susan Campbell first heard about the monkey farm from her neighbor William Stephens. It was the summer of 2013, and Stephens explained to her the troubling news. Someone had purchased a plot of land in their rural neighborhood in south-central Florida and was about to begin construction on a farm to breed, of all things, monkeys.

The details were hazy. But as her neighbor rattled off what he knew—the county had already approved a plan to have up to 3,000 or so monkeys live on the premises—Campbell listened anxiously. She recognized the site he was describing, a patch of land by Bedman Creek, where the main road hits a dead end, roughly a mile from her home. How much noise could 3,000 monkeys make, she wondered. Her two wolfdogs, Diablo and Apache, were going to “flip out,” she later recalled thinking.

Campbell, 62, and her husband live on the outskirts of LaBelle, a small town on the banks of the Caloosahatchee River. It’s the seat of Hendry County, a muggy, agricultural region just north of the Everglades, about an hour’s drive inland from Fort Myers. The area’s low-lying fields are crisscrossed by drainage canals and studded with citrus groves, hog farms, pepper plantings, llama ranches, watermelon patches, cattle pastures—and in recent years, as Campbell learned, monkey farms. There were already two such businesses operating in the county, importing and breeding monkeys for sale to biomedical research institutions. A third breeder would soon open outside the town of Immokalee. The proposed farm near her home would make four. That July, Campbell, who’s in the technical support team for the South Florida Water Management District, e-mailed the county’s commissioners, demanding more information. “Seems like a pretty well-kept secret,” she wrote. Nobody responded.

Before long, however, Campbell and her neighbors found a powerful ally in their quest to keep their neighborhood monkey-free. For decades, animal welfare activists had been fighting a public-relations battle against companies that supply the scientific community with monkeys, arguing it is unnecessary and unethical to use monkeys for testing. Recently, they had scored some victories, managing to get several major airlines, including American Airlines, United, and Delta, to commit publicly to stop transporting research monkeys into the U.S. Now, they’ve shifted their focus to Hendry County.

In the months that followed, a coalition of mainstream and radical animal rights groups took up the cause. Activists wearing T-shirts that read “Stop Hendry County Monkey Business!” disrupted a local economic development hearing. They claimed the county was turning into the monkey-cruelty capital of the U.S. They warned that monkeys might overrun the Everglades, already under siege from invasive pythons. Robbyne Kaamil, a New York-based actor, wrote a song and shot a music video about the plight of the Hendry County macaques. “Florida rise up,” she sang. “Don’t let them turn paradise into hell on earth for primates and all of us. … Free the monkeys. Let them all go. Free the monkeys. Let them go home.”

In November 2014, the Animal Legal Defense Fund, a group based in California, filed suit in state court against Hendry County on behalf of Campbell’s neighbors. The lawsuit alleged that officials had approved the new monkey farm in violation of certain zoning restrictions and without a public hearing as required by Florida law. County officials replied that they had done nothing wrong and asked the judge to dismiss the case. This March the judge made an initial ruling, allowing the suit to proceed to discovery.

Each year, roughly 20,000 or so monkeys are flown from tropical regions worldwide into the U.S. Many wind up at stateside farms. Despite the relatively small number, the monkeys play a huge role in basic scientific and medical research, says Matthew Bailey, the executive vice president of the National Association for Biomedical Research. Before a new drug or vaccine can go on the market, the U.S. Food and Drug Administration requires safety testing using animals. The use of monkeys has been essential, says Bailey, in developing cures for everything from typhus to polio and is integral to the study of currently incurable diseases such as Alzheimer’s and AIDS. “My suggestion is that if you agree with the animal rights narrative, open up your medicine cabinet and throw out all your pills, including your child’s pain reliever,” he says. “Because without animals in preclinical research and testing, we wouldn’t have them.” Clients of monkey farms won’t describe what happens to the animals they purchase. Activists allege every dark scenario from death by Ebola virus exposure to experimental surgery.

If the new farm is built, Hendry County could house up to 10,000 monkeys, making it a hub in the nation’s supply chain. But activists now see it as an increasingly weak link in an otherwise well-armored system. They’re hoping to make the whole thing come to a grinding halt. As a result, what started as a small skirmish in rural Florida has now escalated into a drama with potentially negative repercussions for the nation’s multibillion-dollar pharmaceutical industry. Yet many of the companies involved have chosen to remain silent. PreLabs, the private Illinois-based company that proposed the monkey farm at the center of the Hendry controversy, has said almost nothing in public about its plans or what inspired them. Similarly, the Mannheimer Foundation, which since 2005 has operated a monkey farm in the county, has remained mum. Neither responded to multiple interview requests.

Their silence has only added to the mystery that hangs over the farms’ proliferation in Hendry County. By midsummer, with the activists appearing to gain momentum, Campbell couldn’t help but wonder how her little neighborhood, which doesn’t have so much as door-side mail delivery, emerged as the center in the global monkey trade. “What is the big draw here?” she asks. “Why did they choose this county?”