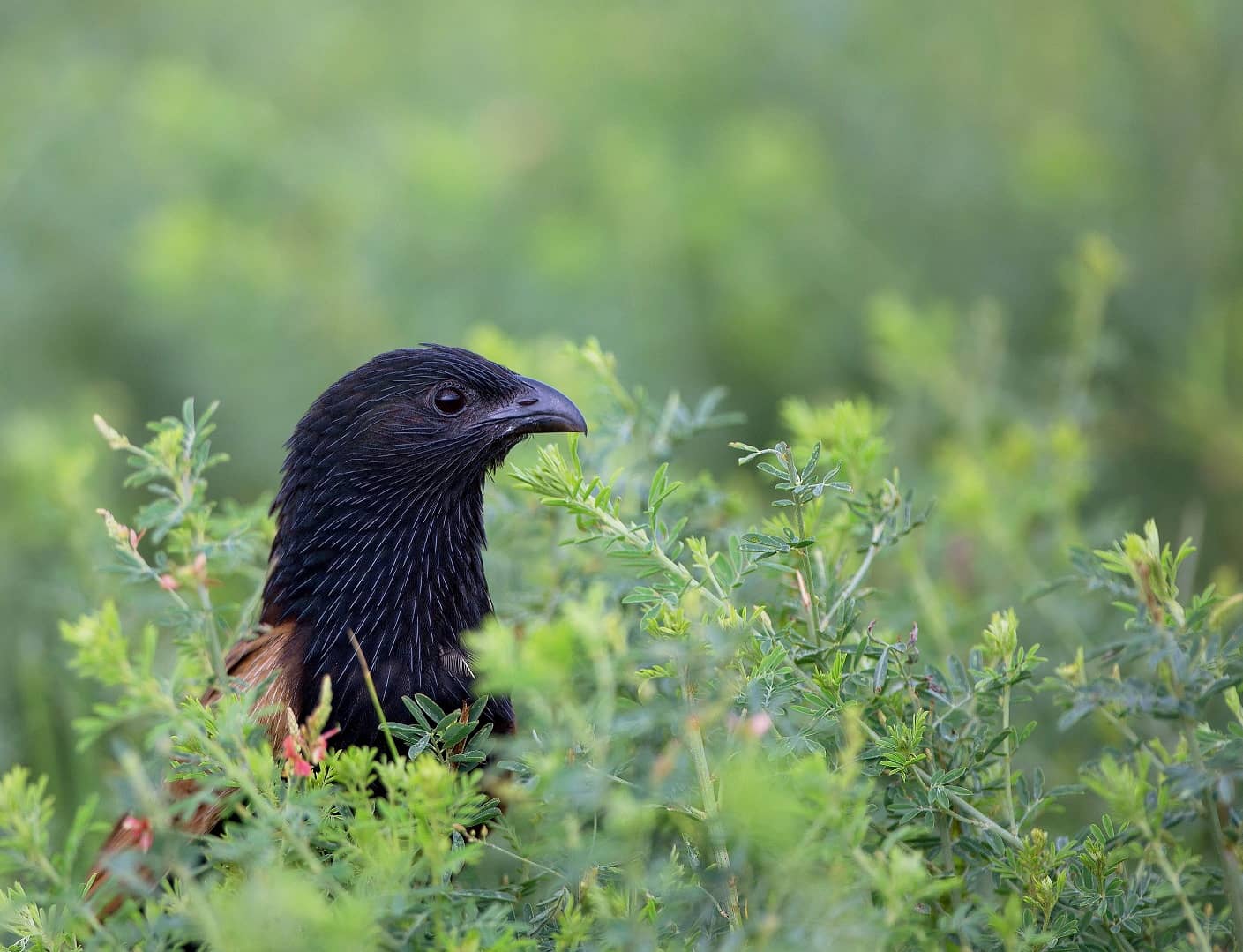 The extraordinary breeding behaviour of the Black Coucal Centropus grillii has piqued the interest of ornithologists for decades, so much so that the species is now regarded as one of the most unusual birds in the world. Of the 28 coucal species found globally, it is the only one known to be polyandrous. The southern African population, moreover, is the only one that is migratory. 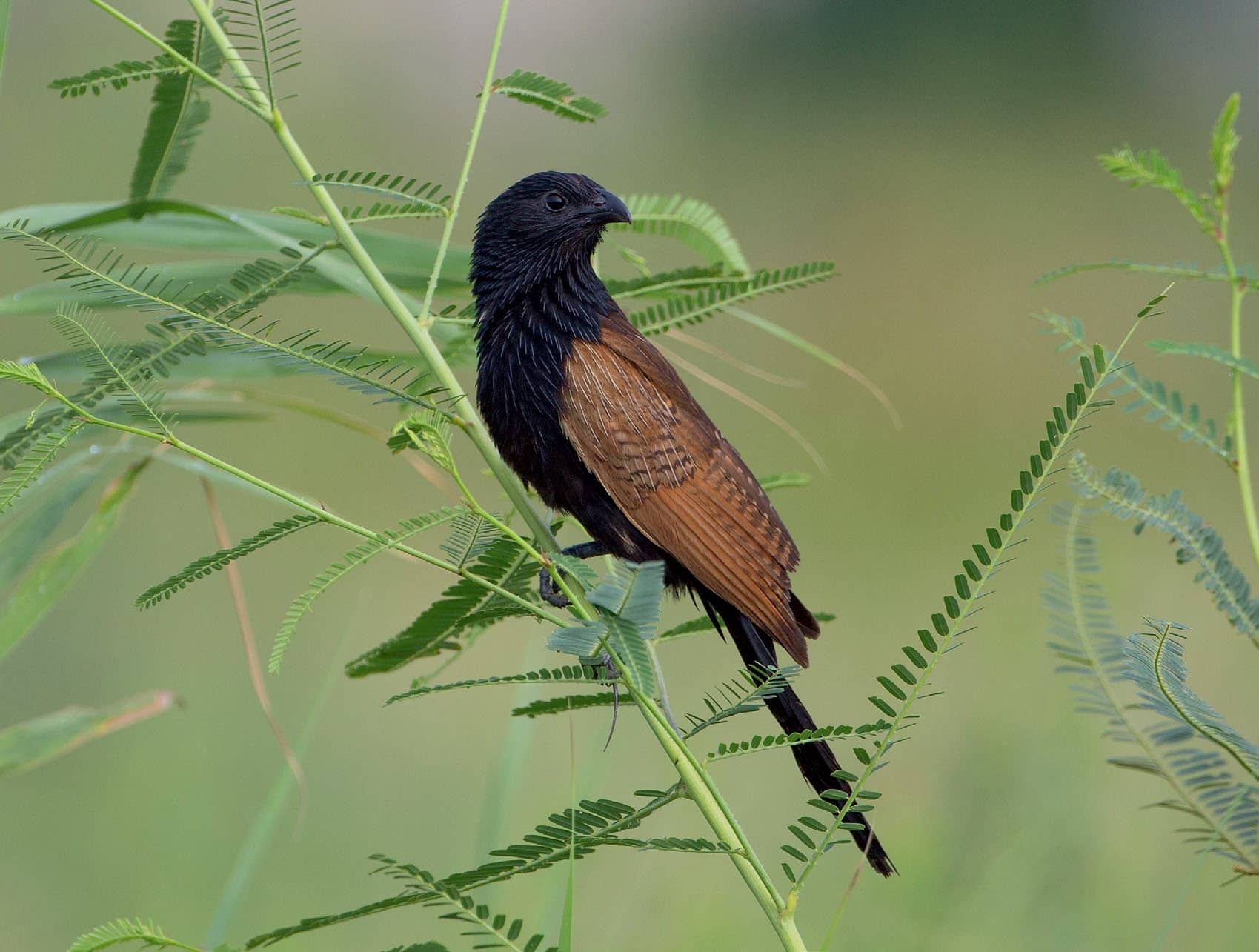 Polyandry is rare among the world’s birds and has been recorded in only about one per cent of species. In this role-reversal mating system, after laying the eggs the female plays no further part in raising the young. What makes the Black Coucal even more remarkable is the fact that its offspring are altricial (hatched in an undeveloped state and requiring care and feeding by the parents), which is almost unknown in polyandrous species. In general they rear precocial chicks, which are far easier to manage as, almost from day one, they are able to accompany the males to feeding sites where they are fed and protected by the male. In the subregion, the species best known to practise this mating system is the African Jacana, but there are others, such as the Greater Painted-snipe and the three buttonquail species. 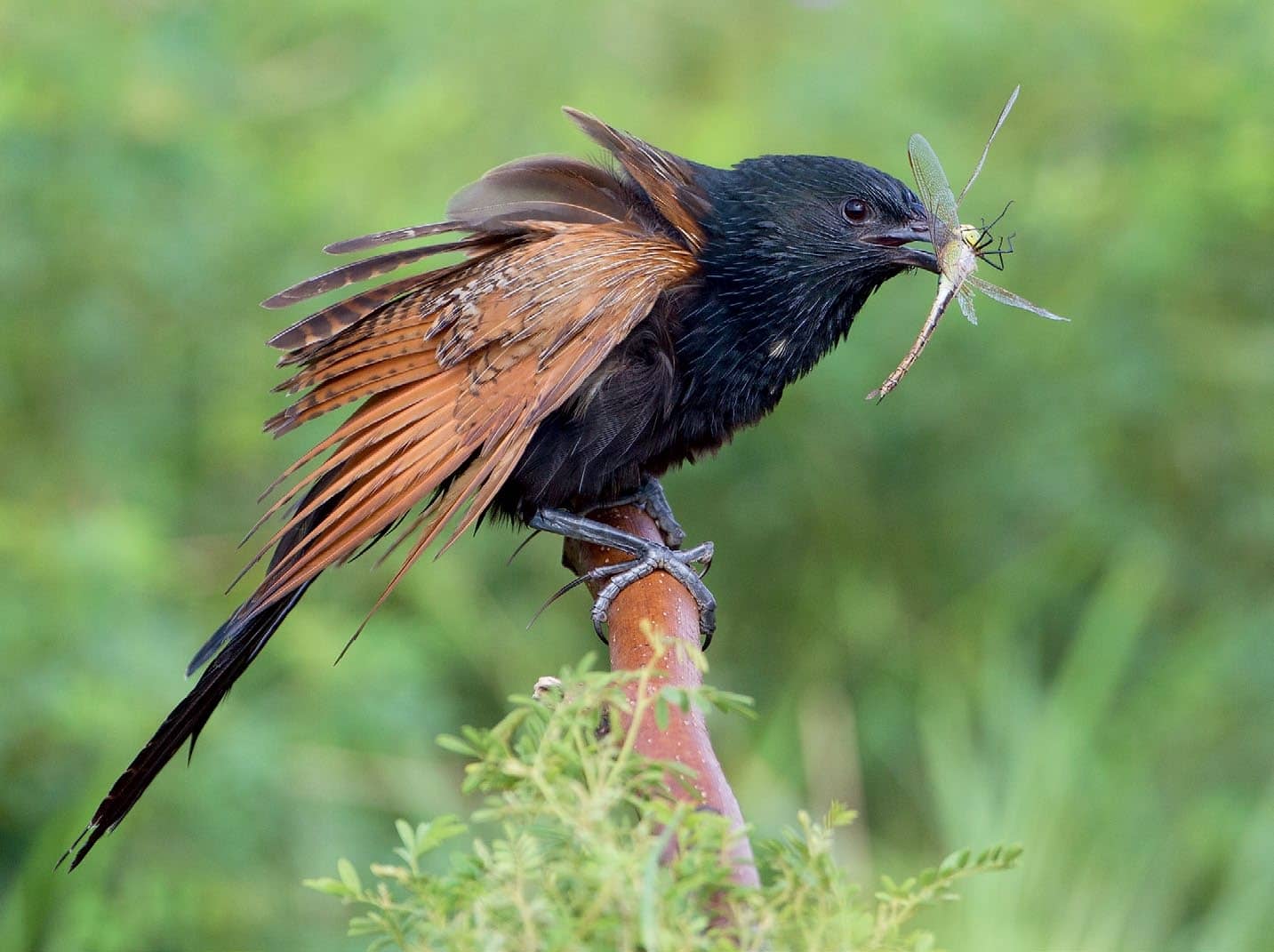 Among polyandrous species, however, the Black Coucal differs in that the males not only are responsible for nest building, incubation and rearing the offspring, but they also have the task of provisioning and protecting altricial chicks for the two-week nestling period. Once the chicks are three or four days old, the male leaves them alone and unattended in the nest for at least 95 per cent of the day while he searches for food as far as half a kilometre away. During this time, he maintains an exceptionally high rate of prey delivery, which can only be achieved at a site where there is an abundant supply of invertebrate prey.

The pressure on the male during the breeding cycle is huge compared to that of the female, which never goes near the nest after having laid the eggs. During summer, the female spends most of her time within the territory soliciting for more potential mates. Amazingly, should the parenting male succumb to predation during the nestling period, the female would continue looking for a mate nearby, unaware that her offspring are starving to death. 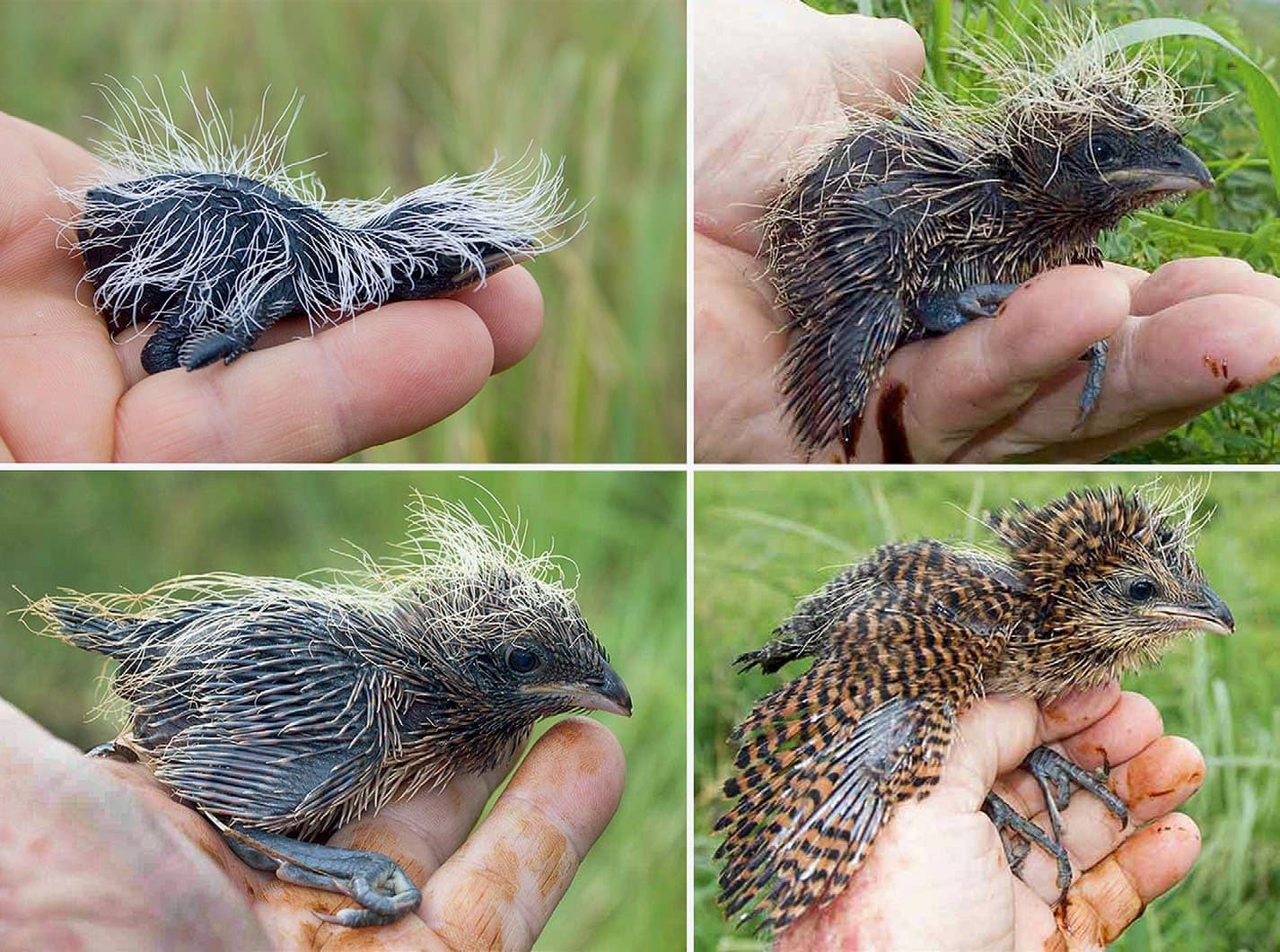 With very little suitable damp lowland grassland remaining in South Africa, the Black Coucal is now one of the rarest breeding birds in the country, with an estimated population of only about 20 breeding groups remaining. Outside national parks, the population is presently so small that the chances of a female being able to attract additional males to a territory are slim. The two core breeding areas for this species are the grasslands surrounding Lake St Lucia and, to a lesser extent, selected areas in the Kruger National Park. The nearby Mozambican coastal grasslands, dominated by cottonwool grass Imperata cylindrica, are unsuitable as a breeding habitat for this species as it needs thick, knee- to waist-high grassland and shrubbery, which serve as a protective refuge from possible raptor predation.

The first Black Coucal found in southern Africa was collected in the 1840s near the Ohlanga River just north of Durban. Although nowhere common, it would have been thinly distributed in suitable damp lowland grassland throughout the coastal belt of northern KwaZulu-Natal. With the almost complete loss of this habitat in KwaZulu-Natal during the subsequent 200 years, the breeding population outside protected areas now stands at a mere handful of birds. The overall population in South Africa, including those in protected national parks, is estimated to be in the region of approximately 20 groups or ‘pairs’. 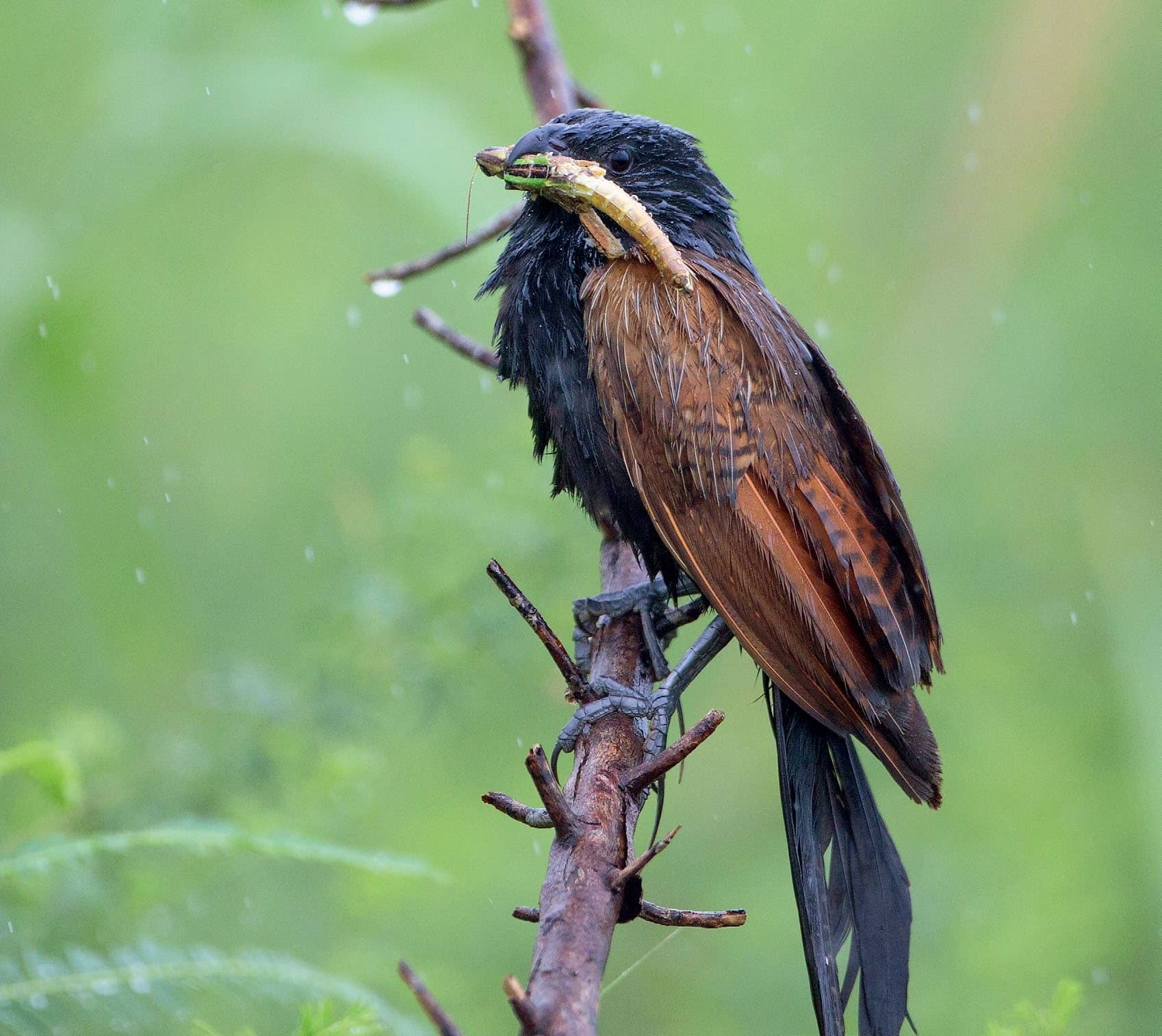